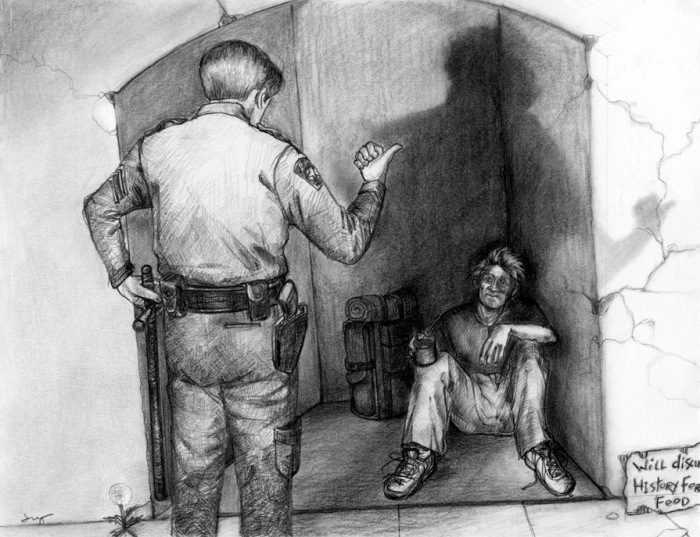 This afternoon I returned home to find yet another offering from my neighbor, Montpelier Rappelle, outside my door. It was adorned with the usual Post-It (“You have GOT to see this!!!”), and inside was a video cassette labelled Ex Parte along with the home-published booklet Fulton Samuels: A Son Remembers, by Fulton Samuels, Jr. After reading the booklet, I put the cassette in my JVC Super VHS deck and prayed the damn thing still worked.

It did. And this time, Monty was right.

According to the booklet, Fulton Samuels was a patent attorney and lifelong fan of film noir. In 1981 he got it into his head to write, direct, and personally finance a feature-length hommage to his favorite genre. The result was Ex Parte.

The film takes place in Santa Monica, where I was born and raised. Not only that, the action centers around the neighborhood where I currently reside, only thirty years ago. The film stars unknowns, a status retained forever after; it seems most of the budget went to the rights for Ralph Vaughan Williams’ Job: A Masque for Dancing, a forty-five minute orchestral suite that serves as the score.

Ex Parte opens with an impressive color tracking shot of downtown Santa Monica. We move from the city hall to the courthouse, and then on to the pier, the carousel, and Palisades Park, all bright sunlight and joy. As this fluid shot ends, we cut across the street to Broadway Avenue, which was then Santa Monica’s skid row. If I hadn’t read the booklet, I would have assumed the switch from color to black and white at this point was deliberate. Not so. A first-time director, Samuels made what must have seemed the logical choice: shoot the film in order. After blowing half the budget on his opening shot, he had to scale back, hence the perverse Wizard-of-Oz twist, which actually works.

In an alcove sits our hero, Jack Tell, a panhandler with a plastic cup in one hand and a cardboard sign in the other: “Will discuss History for money.” Beneath the rags and the beard there’s a handsome man in his late thirties. A shadow falls over him. Starting on spit-polished black brogues, the camera tracks up a pair of trousers creased harder than the Rock of Gibraltar, lingers over a jacket and tie worth more than your car, and finally stops on the man’s face. Clean-shaven, lean, ruthless … this is Austin Salt.

He tosses a century bill in Jack’s cup. Tells him there’s more where that came from.

We cut to the Park, where Salt makes his pitch while Jack harvests Coke cans. Salt’s a stockbroker at a prestigious firm and is on the verge of making the deal of a lifetime, but: “I’ve got jury duty. I can’t go, not now.” His boss, whom he describes as a “Boy Scout asshole straight outta Leave it to Beaver,” won’t let him off the hook. “I’ll make it worth your while, Jack. Come on, you got somethin’ better to do?” By way of an answer, Jack stuffs his bag of cans into the trash.

In a rather deftly executed montage, Jack transforms from a filth-encrusted bum into a Xerox of Salt. But while the men may look alike, we can tell there’s a shred of decency separating Jack from Austin.

Jack arrives for jury duty. Almost misses his cue when “his” (i.e. Salt’s) name is called. An attorney asks him voir dire questions, and Jack becomes juror number three. The trial begins. As the conventions of film noir would permit little else, the case is a grisly rape-murder trial. The victim is one Elaine Shamos, twenty-seven. Her body was found in Palisades Park, not far from the bench where Salt tempted Jack. The defendant is Octavio Garcia, a seven-foot-tall mop-and-bucket man with the look of a simpleton. He seems vacantly curious about the proceedings, nothing more.

As the trial progresses, Jack spies a Nordic-featured woman in the gallery. She returns his curiosity with a supernova gaze, and eventually the two cross paths outside the courtroom. Her name is Gwen, and she describes herself as a “perverse voyeur” whose inheritance allows her to do whatever she likes. By the next scene, she and Jack are in bed. Post-coitus, her first query is, “So what’s your real name, Austin?” He doesn’t tell her, but neither does he keep up the charade of being another man. Gwen wants him to make sure Garcia isn’t found guilty. Why? Because she knows the real Austin Salt, and she also knows that he is Elaine Shamos’s murderer.

True to film noir form, the plot becomes a bewildering kaleidoscope of deceit, betrayal, and perversion. By the end, Gwen has been revealed as Elaine’s lover, and Garcia as the unwilling object of a priest’s affections. Jack, however, remains Jack.

Perhaps even more fascinating than the film’s many convolutions is the story of Fulton Samuels himself. Ex Parte found limited release in the States before making its way to Europe. In France it was a gigantic hit, and in 1982 Samuels was invited to Cannes. For a few days, he was a celebrity. While walking back to his hotel room, he was set upon and killed by a member of la Société du cinéma pur.

The Société was composed of filmmakers, students, and critics who abhorred the “unnatural union” of sound and image, and who believed that only a blind man watching a silent film could adequately express the ideals of movie-going. Ex Parte’s liberal use of Ralph Vaughan Williams must have been particularly offensive to them.

In a bit of irony that Samuels would have appreciated, the trial of his assassin ended in a hung jury.

I feel compelled to mention that I was once a member of the Société, from 1979 to 1980. Their rigor appealed to me, as did their burgeoning female ranks, but after I wrote the script for Sire perdu, a film with but one line of dialogue (On sait où il est enterré–We know where he’s buried), I was placed on “probation” and forbidden to write. By then it was clear the group had become a cult, so one gloomy February morning I marched into the office of the président, produced my membership card, and burnt it in his face. The next day I moved to America.