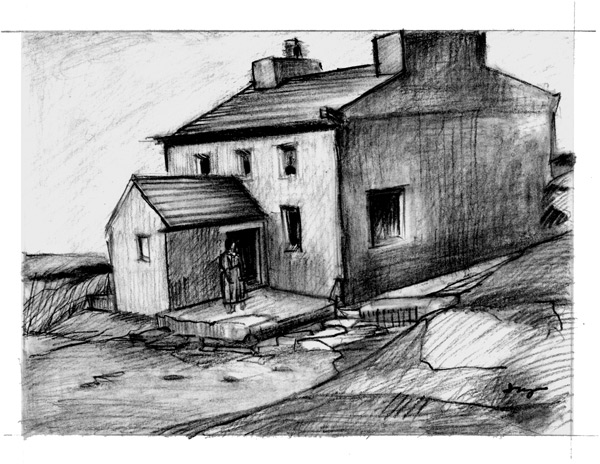 After finishing the illustrations for Sleepers Awake! I started to have a funny feeling that I had heard the name T. Simm before, a very long time ago. Try as I might, I just couldn’t remember where or when.  But a phrase uttered by one of the characters in the film Pumbel Brythegg kept turning over in my mind, trying to rise to conscious awareness.

The phrase was “freaks of nature,” and the old man in the hut used it to describe the perfectly round alabaster pond from which the white horse was drinking.  And there was something else, too.  The talking stone woman’s head – or stone woman’s talking head, or whatever – kept beating at the back of my brain (ultimately leaving me with a hole I didn’t need).

After a day spent trying to recollect how I knew the name T. Simm, I poured myself a cold beer and sat down to watch one of my favorite Ealing Studios movies, The Man in the White Suit, starring Alec Guinness.  In the film, Guinness plays Sidney Stratton, a scientist who invents an indestructible fabric which repels dirt and dye – making it a bright white – and which glows in the dark, due to some of its elements being radioactive.  Somewhere towards the end of the film, I dozed off.  Typical.  But not before I saw Stratton being chased through the night by the union managers and employees of the textile factory.  They had all realized that since the fabric can’t wear out, once everyone buys something made from it, there would be no need to make any more, and the workers would all be out of jobs!  Anyway, due to a formula miscalculation, as Stratton is escaping from the union mob, his glowing suit begins to fall apart, and the union mob finishes the job by unraveling it, leaving Stratton in his underwear.

I had fallen into an uneasy sleep, and images of a glowing Alec Guinness riding a glowing white horse, and holding a talking stone woman’s head (or the other way round) who kept repeating, “I am the eighth wonder of the world!” jumbled around as I began to dream.  Guinness told the head, “Nuts!  Put a sock in it!  Chew coke!”  I entered the dream and asked the trio where they were going.  The horse said, “To Hell!  To the Land of Mist!”  Guinness kicked the horse into a gallop and they all sped towards the perfectly round alabaster pond.  I watched in horror as they jumped in!  As they went over the edge the talking head cried, “I’ll split the atom!  I am the fifth dimension!  I am a freak of nature!”

“That’s it!” I said (to the empty beer glass which I had knocked into my lap) as it all came back to me and I awoke from the dream.  The “freak of nature” –  I knew where I’d heard that before!

My great uncle was named Richard S. Lambert.  I never met him, and I don’t know very much about him except that he worked in broadcasting, I think in the BBC, and was a member of the British Film Institute.  His first wife, my great aunt, was Kate Elinor Lambert.  I called her Ellie.  I remember more about her, because she was an artist like me.  She used to illustrate a publication that she and Richard put out.  (The Stanton Press, I think she said.)  I met Aunt Ellie after she and Richard had divorced (they had moved to Canada at the start of WWII) and Ellie came to stay with her sister, my grandmother.  She was pretty old by then, but when she visited my mother and me, she showed me how to use the pencil and paper that my mother gave me.  I owe Ellie a lot.

Anyway, back to Richard Lambert.  You see, Ellie used to tell me stories about the time he worked for the BFI and arranged screenings of, yes, the films of none other than Teodor Simm – T. Simm!  But there was one film, or film project, that Ellie herself was involved in, along with Richard, and she especially loved to tell me about it.

It turns out that great uncle Rex, as he was known, had a hobby, the supernatural.  He even wrote two books on his investigations.  One was something like Exploring the Supernatural, and the other was the book he wanted T. Simm to turn into a movie: The Haunting of Cashen’s Gap.  The story concerned a man, Jim Irving, his wife Margaret, and their daughter Voirrey.  They lived in near isolation in a house (Cashen’s Gap) on a hill on the Isle of Man.  As the story goes, one night in the early 1930s, the Irvings had a visitor.  But this was no ordinary visitor.

It was… a talking mongoose!  Who called himself Gef!  (Pronounced “Jeff,” by the way.)  According to the Irvings, Gef made himself at home, taking up quarters in Voirrey’s room.  He spoke in a high, squeaky voice and said things like: “I am not a spirit.  I am an extra, extra clever mongoose,” and “I am a ghost in the form of a weasel, and I shall haunt you with weird noises and clanking chains,” and “I am a freak of nature!”

Whenever Ellie used to come to this part of the story, she would always crack up.  “Imagine,” she would say, “a talking mongoose who said it was a freak of nature!  Of course it was!  Whatever else could it be?  Certainly not normal, mind you.”

Great uncle Richard had actually visited the Irvings, and thought the story of Gef the Talking Mongoose would be the film that would vindicate him and his studies on the supernatural, and give the lie to all his accusers.  I think he had already filed a lawsuit against someone who called him a fraud.  Richard had actually persuaded T. Simm to make the movie, and I believe that together they had secured an advance from none other than Ealing Studios.  (See how it all comes together?)  But when Simm delivered the finished script titled Doarlish Cashen, which he and Richard had adapted from Richard’s book and which Aunt Ellie had illustrated, Ealing balked.  In fact, the studio backed right out of their promise.  The idea of a film about a talking (and possibly singing mongoose) was just too bizarre for them.  Although, a few years later, a movie about a glow-in-the-dark suit that lasts forever wasn’t…  In any case, Ealing ended their association with Timm and the Lamberts.

Richard was able to keep the advance, which I think Ellie got as part of the divorce settlement, but their relationship with Timm was over.

Now that I think about it, when Aunt Ellie used to tell me that story, she always had a book in her hand.  It was softbound with brads holding the pages together.  And it had pictures.

Excuse me, gentlemen, while I search the basement.