An Epistolary Retrospective of T. Simm 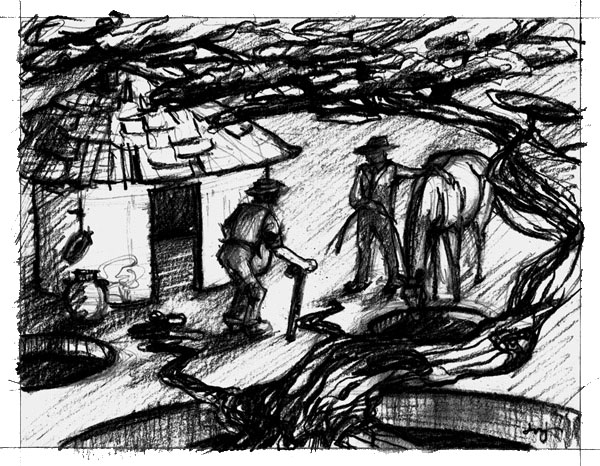 A friend connected with the ranch just brought over this DVD, Pumbel Brythegg. An Icosahedron Production, released through Janus Pictures.  Directed by T. Simm.  Soundtrack composed and performed on the harmonium by Fomalhaut Joad.  Seems to have been filmed in remarkable black and white (almost with a Carl Dreyerish quality), like on old silver nitrate from the silent era.  Near a hut there are three or four perfectly round ponds, kind of like alabaster bowls.  The elderly man who lives in the hut says to a man leading a white horse, that the bowls are “freaks of nature” and that you can “… lead a horse to water, but you can’t make him drink.”  But the horse is already drinking, with enthusiasm.  Later the man with the horse comes back alone to the ponds; there is a strong wind and blasted trees which look like Scottish knock-offs of Monterey cypresses resisting the wind.  The wind exposes a life-size statue of a woman’s head among the trees beside a short bluff.  The woman starts talking to the man.  He asks if she is an oracle.  She says she doesn’t know what that means.  She is a very pretty but somewhat ditzy oracle who speaks with a Scottish brogue.

The following day, the old man and some workmen come out to help the man “excavate” the stone woman’s head from where it is placed.   The man wants to take it to Glasgow.  Apparently nobody but the man with the horse knows that the woman can speak.  Ultimately a small wagon is brought for the statue, and the horse leaves.  One of the pools immediately empties of water as if a bathtub stopper had been removed.  The old man goes back to the hut to drink with his friends, one of whom has a guitar.  He starts “competing” with the film’s harmonium soundtrack.  Another man starts imbricating bagpipe music.  Whisky flows freely, and as the actors become drunker, they start losing their Scottish accents and revert to what sounds like London speech.

In a neighborhood of what is apparently Glasgow, a workman is “installing” the oracle statue above the door of an apartment below street level.  Later the “man with the horse” appears, though he no longer has the horse with him.  He runs up the stairs to the street level entrance to the apartment building, which brings him eyelevel with the statue if he bends over the railing a bit.  He enters into a flirtatious conversation with the oracle, who says that she “…always knew, that sometime she would wind up in Glasgow.”  There proceeds a strange montage, thematically and pictorially connecting the scene in Glasgow with the strange Northern country which we have just left: there are carriages, buses, trains, then carriages again, then the horse, then the hut, then the old man, then the pools, then the wind.  It is Cocteau without Cocteau.

Couldn’t find anything on IMDb, and the man who brought the film was neither interested in movies himself, nor did he even seem to know the provenance of this sleeper of sleepers.  Hope you’ll have better luck, Montag. 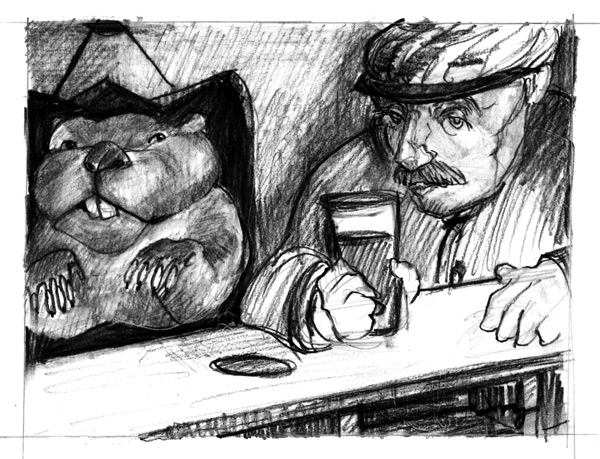 How fortuitous that you have seen Pumbel Brythegg!  This means that between us we have experienced director T. (for Teodor, by the way) Simm’s “Welsh Diptych.”  The one I happened to catch was Pazel Hethig, which I believe is the second of the matched pair.  It was shot in extremely muted, almost Lumière-esque color with a pronounced grain.  (How much of this was intentional I cannot be sure, as the print I saw had probably had a rough life.)  In fine, it concerned a frowsy bar patron who, no matter which establishment, would habitually sidle up to a taxidermal, plaque-mounted beaver and extol the virtues of “very cold” gin and tonics, all the while without drinking them.  His encomium was, of course, in subtitled Welsh, and I later learned that the unsteady text had nothing at all to do with what he was saying (in fact, driving instructions from Cardiff to Abergele).  If I am able to track down a copy, I’ll be sure to send it your way.

Looking forward.  I did not catch Simm’s first name when I saw the film; I thought it might have been Taylor, but I knew it started with a “T.”  It is puzzling that the Scottish part of the Diptych had a more Welsh sounding name than the Welsh part of the Diptych.  I guess if any of my research is going to be effective, I will have to look for material on the director.  I am hoping that there is a Film Department at the University of —, and that they have a good library.

The gentleman who brought Pumbel Brythegg to the ranch was so inconspicuous as not to have made an impression on anyone.  I was a little disturbed that he insisted on taking his movie home with him before I was able to see if there was any supplementary material such as special features.  Was Pazel Hethig also released by Janus?  It is a fairly big distributor of just such outré cinematic material.  Where did you find out that both films were part of a Diptych?  Inquiring minds need to know.

I wonder if there are any films from Brittany in Breton, or films from Provence in Provençale.  For me the future of the world lies in the reassertion of microcultures and ministates.

I must open this letter with another exclamation: How odd that you should mention Brittany, as it was in Rennes that I chanced to see Pazel Hethig.  As I may have mentioned, an obligatory mid-year conference for all of the — took place there; this would have been back in 2007.  We were all of us put up in the same hotel – with wonderful, sparkling bathrooms, I might add, such a rarity in supposedly belle France.  Anyway, I awoke late the morning of a trip to a local newspaper, so after a leisurely breakfast during which I had as companion the hotel parakeet, I wandered the cobbled streets.  Beam and plaster buildings of surprisingly recent construction lined them (the town has a long history with fires and refuses to admit defeat), which was why the projecting ship’s bow of a theater marquee caught my eye.  There was but one screen, used alternately to show a dour documentary about Breton activists, and Pazel Hethig.  (Put on the bill out of microcultural solidarity perhaps?)

I cannot recall how many or which distributors’ logos preceded the film proper, but bicephalous Janus may have been two of them.  After the last reel had flickered past, I knocked on the projectionist’s booth.  The door opened inward, and a formless creature retreated to allow me entrance.  Fermez la porte, it said.  I did so.  The booth was very dark; the only light came from the molten pinprick of the projector, which seemed to crowd the small space with its beastly heat.  The machine’s operator introduced himself as Monsieur Ossian Chiaro, presumably of Scotch-Italian descent.  I tried to shake his hand, but he was clutching a film reel to his chest and refused to proffer even one limb.  Our conversation played out in the same miserly fashion.  Eventually I learned the director’s forename (shortened to the familiar initial in the credits), and that Pazel Hethig was preceded by Pumbel Brythegg.  When I asked him if they would be showing that film as well he told me curtly to leave (finally removing one hand from the reel in order to indicate the door).  Confused, I quit the theater and returned to my hotel, where my colleagues had miraculously reappeared en masse just in time for dinner.

A friend who was doing some belated spring cleaning found an old video tape and gave it to me.  On an otherwise plain white cover, it had the words Pterhausen Stiekeneggs, directed by T. Simm.  I realized that I may have, with some serendipity, stumbled across the final part of what is now the Simm Triptych.

The print is bad; the primitive Technicolor is washed out, like a fading, hesitant rainbow.  It is scored by solo harmonica.  A young man walks down the hallway of an apartment building.  He comes to a door, knocks.  The door opens.  A regal, quite old cat is standing there, an open 7-UP bottle in its paw.  A pink flex straw grows from the mouth of the container.  The young man takes the bottle and moves on to another apartment door that is ajar.  He enters.  An ancient man, bent and misshapen, is hunched over a .50 caliber machine gun.  He speaks: “I never killed anyone!”  The young man sets the bottle beside him and leaves.  He approaches another apartment and, in so doing, passes a window which shows us a moment of scenery indicating that the building is a high-rise.  The ocean beyond stretches forever to the horizon.

The door of this apartment is different from the others.  The young man pushes a button.  The door slides open, parting in the middle.  Debussy’s The Girl With The Flaxen Hair is heard on the harmonica.  A beautiful young woman with long blond hair appears in the doorway.  As the door is hydraulic, a medium sized box above controls the opening and closing.  Suddenly the box falls from its perch and smashes into the girl’s head.  She falls.  The young man helps her up.  She seems all right, but is now thirty years older. A uniformed maintenance person walks by, observes the scene for a moment, and then moves on.

Now the young man, who looks suddenly older and seems to have developed a limp, moves up a street to a restaurant.  Inside, he silently orders food and is served a dish full of live shrimp on a bed of rocks.  The shrimp are vociferously eating popcorn.  The now old man looks out the window near his seat.  The sun is setting over the bright blue motion of the sunlit sea.